Write your own review
Existing reviews
Alabaster Swirl Pendants Are Spectacular
I ordered two of these Alabaster Swirl pendant lights for the breakfast counter in my newly remodeled kitchen.  My cabinets are bamboo, and I thought that these pendants would complement them nicely.

They arrived within two weeks or so, and were packed very well.  One of them was mis-wired (the connections were loose at the socket, and shorted).  It was a simple fix, but something that should have been checked before shipment.  Though both pendants were beautiful, they were very different in appearance.

I contacted ACLighting, and sent them photos of the two pendants that I had received.  I recognized that though there were always variations in hand crafted product, the variation in these two was much wider than I would have expected.  ACLighting was very accommodating, and offered to create more of these pendants, and send me two that were more similar in appearance.  So I returned the two that I had received, at my expense.

I received the replacement pendants within a couple weeks, and they are spectacular.  This time the installation was straightforward, with no problems.  They look beautiful in my kitchen.  I opted for the brushed nickel hardware to complement the cabinet pulls, and they go very well together.

Make sure that you install them with a proper dimmer switch, and they can be used, along with under counter lighting, as mood lighting at night, when you don't otherwise need the overhead recessed lighting.

Overall, I am very pleased with the pendant lights, and with the service that ACLighting provided to me.  I would not hesitate to recommend them to anyone.
Anonymous Customer | 3/30/2013 4:25 AM
Was this review helpful? Yes No (0/0) 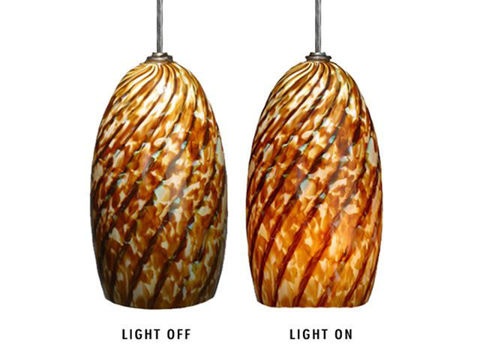 Your message has been sent.
*
*